Sanitary and Phytosanitary Measures and Technical Barriers to Trade: How Much Do They Impact U.S.-EU Agricultural Trade?

Each country has a unique body of regulations that governs the importation of agri-food products. These regulations include sanitary and phytosanitary (SPS) measures that aim to ensure food safety and combat animal and plant disease and technical barriers to trade (TBTs) that set out product requirements such as production practices and labeling. While these regulations are intended to ensure food safety and animal and plant health, they can restrict international trade flows between countries with divergent standards and requirements. Over the past two decades, expanding global trade and declining tariffs and traditional barriers to trade have brought non-tariff measures (NTMs) such as SPS regulations and TBTs to the fore of trade policy discussions. For agriculture, SPS measures and TBT are among the most frequently cited barriers to trade. But to what extent do these measures restrict agricultural trade and can their impact be quantified?

ERS researchers addressed these issues in a recent study by estimating the impact of selected SPS standards and TBT regulations on agricultural trade between the U.S. and one of its largest trading partners: the European Union (EU). The researchers first calculated the value of agricultural trade between the U.S. and the EU under a scenario where NTMs do not exist and compared that with the actual value of trade between the two countries in several major product groups. The amount by which actual trade fell below the trade value estimated in the absence of NTMs was attributed to NTMs. The researchers then calculated the tariff level that would reduce trade by the same amount as NTMs. Findings suggest that SPS regulations and TBTs have a large impact on U.S. agricultural exports to the EU, with the tariff equivalent of these measures ranging from 23 percent to 102 percent. Due to data and modelling limitations, not all SPS/TBT measures were evaluated. The estimates are not intended to be exhaustive but to capture a sample of SPS/TBT concerns that have been raised in EU-U.S. trade discussions. Furthermore, the calculated tariff equivalents reflect the impact of both NTMs and, for some goods, private standards imposed by retailers.

Of the product groups investigated in the report, SPS and TBT measures applied to U.S exports of poultry to the EU were found to reduce trade by the largest percentage. Their impact was estimated to be equivalent to that of a 102-percent tariff. Other U.S. exports to the EU also appear to be heavily affected by SPS and TBT measures. The restrictive impacts of various NTMs applied to U.S. exports of pork, corn, fruits, and vegetables were found to be equivalent to a 35- to 81-percent tariff. Moreover, the tariff equivalent of SPS and TBT measures on U.S. beef and soy exports to the EU were estimated at 23 percent and 17 percent, respectively. With the exception of beef, the tariff equivalent of SPS measures and TBT for all product groups covered in the study were much higher than tariffs currently applied to U.S. exports to the EU. Tariff equivalent estimates that are large in percentage terms may have a small impact in dollar terms if trade in the affected sector is not large, while the reverse is true for small tariff equivalent estimates in important trade sectors. 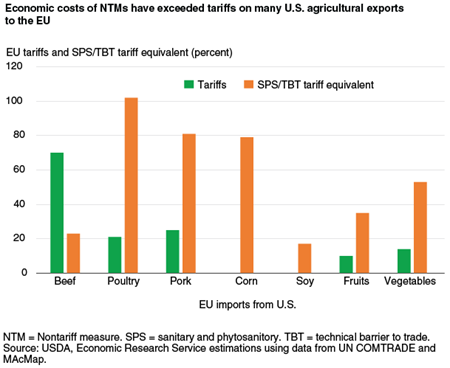