U.S. corn and soybean farmers employ a range of weed control practices. For example, they till soils, rotate their crops, mow their field edges, cultivate for weed control, and carefully consider factors such as plant density and planting dates. That said, most U.S. farmers rely heavily on chemical herbicides for weed control. Herbicides were applied to more than 95 percent of U.S. corn acres planted in 2010 and U.S. soybean acres planted in 2012.

Over the course of the last two decades, U.S. corn and soybean farmers have dramatically increased their use of glyphosate (the active ingredient in popular herbicide products such as Roundup) and decreased their use of herbicide products containing other active ingredients. In 2015, ERS researchers found that the percentage of soybean acres treated with glyphosate, by itself or in combination with other herbicides, increased from approximately 25 percent in 1996 to 95 percent in 2006. The percentage of corn acres treated with glyphosate rose from about 4 percent in 1996 to 35 percent in 2005. This shift in herbicide usage contributed to the development of over 14 glyphosate-resistant weed species in U.S. crop production areas. 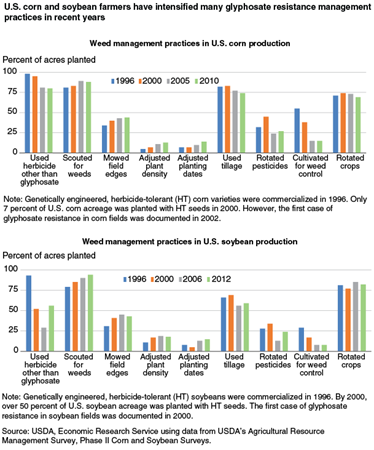