The Size and Scope of Locally Marketed Food Production

by Stephen Vogel and Sarah A. Low

In 2012, 163,675 farmers sold an estimated $6.1 billion in local foods, according to recently published ERS estimates. Our definition of local foods includes food for human consumption sold via direct-to-consumer (e.g., farmers’ markets, on-farm stores, farm stands, pick-your-own activities, and other farmer-to-consumer venues) and intermediated marketing channels (sales directly to restaurants, grocers, schools, universities and other institutions, as well as sales to distributors, brokers, and other aggregators dedicated to local foods sourcing). Farms with local food sales represent 7.8 percent of U.S. farms, and local food sales account for an estimated 1.5 percent of the value of U.S. agricultural production.

A total of 144,530 farmers sold $1.31 billion in food through direct-to-consumer (DTC) channels, accounting for approximately 20 percent of local food sales. Although the number of farmers marketing through DTC channels increased between the 2007 and 2012 Censuses of Agriculture, the total value of DTC sales declined by 1 percent when adjusted for inflation. Between the 2002 and 2007 Censuses, the inflation-adjusted value of DTC sales had increased by 32 percent.

The number of local food aggregators, known as regional food hubs, increased by 288 percent between 2007 and 2014, to a total of 302. This increase may indicate growing economies of scale and scope in local food systems. By engaging in market outreach activities and offering technical services to producers, food hubs provide scale-appropriate markets for midsized farmers and opportunities for small and beginning farmers to scale-up local food sales without increasing the time farm operators and their households spend on marketing activities. Geographically, most food hubs are located in metropolitan areas. Fifty-six percent of the food hubs are found in a broad Northeastern quadrant stretching from Wisconsin to North Carolina, and 23 percent are on the West Coast. 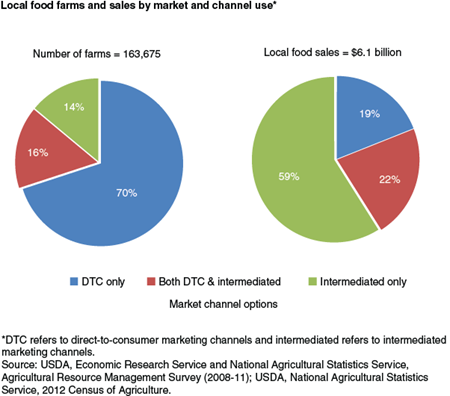 Direct and Intermediated Marketing of Local Foods in the United States, by Sarah A. Low and Stephen Vogel, USDA, Economic Research Service, November 2011