Lack of access to full-service grocery stores and other sources of healthy food options has been thought to be linked to obesity and other diet-related diseases. Some communities are engaged in efforts to attract supermarkets and farmers markets to underserved neighborhoods. Such increased access will save travel and time costs, lowering the “shopping cost” of healthier food choices. A recent analysis by ERS researchers and colleagues found that prices play a larger role than access in determining how participants in USDA’s Supplemental Nutrition Assistance Program (SNAP) allocate their food budgets.

The researchers used quantity and expenditure data from a 1996-97 survey of SNAP participants—the most recent national survey that contains both food quantity and expenditure data and includes measures of food access. While comparative measures of food access in 1996-97 versus today are not available, car ownership for low-income areas has grown from 82.1 percent in 2000 to 84.8 percent in 2010, suggesting that travel time and the associated shopping cost might have declined over time for low-income households. For this reason, any relationship between access and food purchases likely would have been stronger in 1996-97 than in more recent years.

Access, however, was not the main driver of purchase decisions. Instead, prices and demographic factors (income, household size, etc.) held more sway. When price and demographic factors were accounted for, the effects of food access were quite small or negligible; of the 13 food groups, very difficult access was associated with purchases of just 2 of the food groups (beverages and canned meats), and difficult access was associated with purchases of only 1 food group (non-canned fruits and vegetables). In contrast, price increases led to statistically significant declines in purchases by SNAP households for all 13 food groups. If prices for a food group rose by 10 percent (and other prices did not change), purchased quantities were predicted to fall—ranging from a 6.1-percent drop for non-canned meats to 12.4 percent for beverages. These findings suggest that strategies to help low-income people improve their food choices may need to focus more on affordability than accessibility. 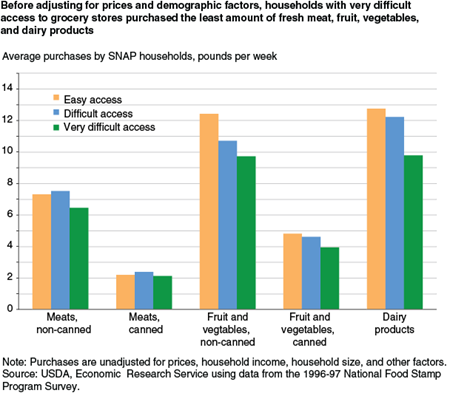