by Keithly Jones and Anita Yadavalli

In 2012, reports that as much as 70 percent of ground beef sold in supermarkets could contain lean finely textured beef (LFTB), commonly referred to as ‘pink slime,’ attracted considerable media attention. LFTB is an inexpensive beef product made up of leaner processing beef and fifty percent fed-cattle beef trimmings that uses an FDA-approved pathogen reducer called ammonium hydroxide. Media coverage of LFTB increased quickly over a two-month period beginning in March, 2012. The initial effect of media coverage appeared to discourage consumers and wholesalers from purchasing LFTB-based products. However, some of the fear and negativity associated with LFTB was alleviated as subsequent media reports noted that the use of ammonium hydroxide in food processing was not new. By March 2013 it was reported that only 5 percent of ground beef contained LFTB.

ERS researchers created a news index based on the number of articles gathered from LexisNexis Academic containing the phrases pink slime, lean finely textured beef, LFTB, finely textured beef and FTB. This was a weighted news media index developed based on survey data from a Pew Research Center for the People & the Press study that showed that the percentage of Americans who get their news from different news outlets varied.

The research found that consumers initially responded to the perceived food scare by making changes to their meat and beef consumption, but their behavioral response was temporary. Media coverage appeared to impact consumer demand for ground beef only for several months in 2012, though many retailers considered removing the product from their stores due to the negative publicity. Results showed temporary and minimal effects on other meats; for example there was a temporary increase in demand for prime beef, which is a whole cut that does not contain LFTB. 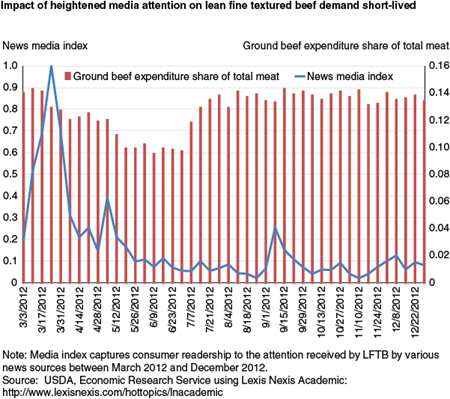