Most U.S. Households Do Their Main Grocery Shopping at Supermarkets and Supercenters Regardless of Income

In a 1943 speech, Winston Churchill declared “Healthy citizens are the greatest asset any country can have,” echoing a sentiment expressed by other observers of history and society. A key component to healthy citizens is a varied and nutritious diet. Where people shop for food can influence what they purchase and what they eat. If healthy foods are hard to find in a store, people may gravitate to less healthy options. If someone’s main grocery store option is a small convenience store where processed foods with fats and sugars dominate, choosing a healthy diet may be more difficult.

A new national survey jointly sponsored by ERS and USDA’s Food and Nutrition Service—the National Household Food Acquisition and Purchase Survey (FoodAPS)—is the first survey to collect comprehensive data about food purchases and acquisitions, both from grocery stores and other food retailers and from restaurants, sandwich shops, school cafeterias, and other eating places. The survey purposely included a disproportionately high number of households that participate in USDA’s Supplemental Nutrition Assistance Program (SNAP) and other low-income households to allow researchers to construct a more detailed picture of the food shopping habits of low-income Americans.

Understanding if and how shopping patterns vary for different subsets of consumers has implications for increasing the effectiveness of nutrition education and other efforts to help Americans improve their diets and health. In ERS’s initial analysis of the data, researchers looked at whether travel modes to the stores where households do their usual grocery shopping, the types of stores patronized, and distance traveled to stores differ by participation in food assistance programs or food security status.

How one travels to a grocery store can influence what gets purchased. If a person takes a bus or walks to a store, they are limited to what can be carried or pulled in a cart. People may be less likely to buy heavy items or multiple cans of on-sale tomato sauce if they do not have a car to get the groceries back home. Shoppers without access to a car who walk to the store every day or so may be more likely to buy fresh ingredients for that night’s dinner, or maybe their purchases consist of grab-and-go prepared meals. A person needing to borrow someone else’s car—or share a ride to a store—may not be able to shop as frequently or on their desired time schedule, for example, when supplies are running low.

FoodAPS collected detailed information about food acquisitions by all household members over a 7-day period. Data were collected between April 2012 and January 2013, and a total of 4,826 households, comprising 14,317 individuals, completed the survey. The main food shopper or meal planner for each household (the primary respondent) provided a variety of information about the household, including where the household did most of its food shopping (primary store) and the typical mode of transportation used to get to this primary store. While FoodAPS oversampled low-income households by including more low-income households in the survey than their share of the total population, responses were weighted to yield nationally representative estimates of all U.S. households as well (see box, “FoodAPS Fills Data Gaps”). 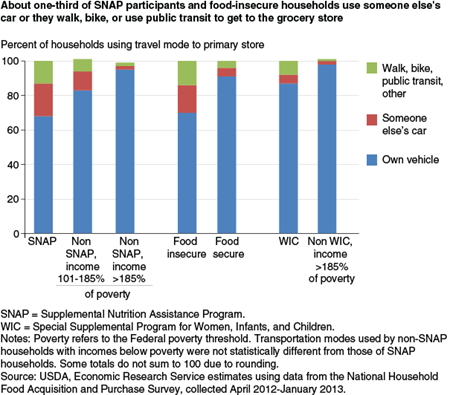 Supermarkets and supercenters dominate the food shopping of most U.S. households. Vehicle ownership, participation in SNAP, food-security status, and income do not appear to influence the type of stores households use for their primary shopping.

In addition to identifying their primary store, FoodAPS respondents also reported a secondary store that they regularly used as an alternative store for food shopping. These primary and alternative stores were grouped into four categories:

Supermarkets and supercenters have greater depth and breadth of products than the other two categories, stocking a full line of fresh and processed meats, dairy, fruits, vegetables, bakery products, etc.

Most Americans Bypass the Supermarket Closest to Them

The average SNAP participant lived 1.96 miles from the nearest supermarket or supercenter, but traveled 3.36 miles to their primary food store. These findings are consistent with previous studies that found that SNAP households do not necessarily shop at the nearest supermarket. Food-insecure households and WIC participants also bypassed the supermarket or supercenter closest to them and traveled 2.92 miles and 3.15 miles, respectively, to their primary stores for grocery shopping.

Data from USDA’s new FoodAPS survey provide insights into where low-income Americans shop for food and how they travel to those stores. While most consumers—both low income and higher income—do their main grocery shopping at supermarkets and supercenters, how they travel to those stores can differ. ERS analysis of FoodAPS data found that about a third of SNAP participants and food-insecure households used someone else’s car, or they walked, biked, or used public transit for their primary food shopping. Only 5 percent of higher income consumers used these travel modes for their main food shopping. Walking, biking, and taking a bus can be more time-consuming and can limit the amount and types of groceries that can be purchased.

Borrowing someone else’s car or sharing a ride to a store is likely to mean less frequent trips to the grocery store. Another analysis by ERS using data from the National Health and Nutrition Examination Survey (NHANES) found that 28 percent of SNAP participants indicated they made their major food shopping trips just once a month or less frequently compared to 8 percent of those with incomes above 185 percent of the poverty threshold. Seventy percent of SNAP participants rated “how well food keeps” as being very important to them in their food shopping selections—the second most highly rated attribute, and ahead of price, nutrition, and convenience. Less frequent shopping has implications for menu planning and food choices. Healthy food shopping strategies may need to be adjusted for the shopping realities of low-income shoppers. Continued exploration of the FoodAPS data by ERS researchers and others will assist with these efforts.

USDA’s National Household Food Acquisition and Purchase Survey (FoodAPS) was designed to fill a critical data gap and support research to inform policymaking on key national priorities, such as health and obesity, hunger, and nutrition assistance policy. The bulk of economic research in these areas has had to rely on individual-level dietary recall data, consumer expenditure surveys, retail store purchase data, or in some cases, changes in national supplies of specific commodities. However, these data sets do not provide a complete picture of the way in which food prices, local food environments, and participation in USDA’s nutrition assistance programs affect the amount and types of foods that households purchase or acquire for free. These data sets do not allow researchers to assess the extent to which low-income households rely on alternative sources, such as food pantries or relatives, to supplement tight budgets.

To provide a more detailed and complete picture of the set of factors that influence consumer food choices, FoodAPS collected information about quantities, prices, and expenditures for the foods and beverages purchased by all household members from grocery stores and other food retailers (food at home) and from restaurants, fast food places, and other eating places (food away from home). Detailed information was also collected about foods acquired for free such as from schools, community food pantries, and gardens. Purchases and acquisitions were recorded over the course of 7 days.

The main food shopper or meal planner provided information about the household and individuals through two in-person interviews. These interviews collected demographic and other information likely to influence decisions about what to purchase and what to eat—including income, participation in various food and nutrition assistance programs, non-food expenditures, health status, and diet and nutrition knowledge.

To shed light on the extent to which local food environments shape food choices, FoodAPS also includes a geography component, with the locations of different types of food stores in a 20-mile radius from each respondent’s home, the location and type of restaurants within a 1-mile radius from each respondent’s home, time and distance measures of access to these stores and restaurants, and the prices charged at each of these venues.

Another way in which FoodAPS is unique is that it oversampled lower income households, particularly those that participate in USDA’s Supplemental Nutrition Assistance Program (SNAP). This provides a total picture of the foods and beverages purchased and acquired by households of all income levels, and also allows a deeper look at populations sometimes overlooked by private market research companies.

To get a better sense of how the distribution and levels of SNAP benefits influence food choices, FoodAPS includes information on the dollar value and receipt date of SNAP benefits for each SNAP participating household during the interview period. Administrative data on SNAP participation were also linked to the survey responses to improve the quality of collected data.

To assess how food prices, local food environments, and program participation influence nutritional quality of food purchases and acquisitions, FoodAPS also contains information on the nutritional content of items purchased and acquired, such as caloric content, sodium levels, and servings of whole grains.

More information about the survey, data collection, and data releases can be found at: http://www.ers.usda.gov/data-products/foodaps-national-household-food-acquisition-and-purchase-survey.aspx

Where Do Americans Usually Shop for Food and How Do They Travel To Get There? Initial Findings from the National Household Food Acquisition and Purchase Survey , by Michele Ver Ploeg, Lisa Mancino, Jessica E. Todd, Dawn Marie Clay, and Benjamin Scharadin, ERS, March 2015