U.S. Beef Exports to the EU Grow Despite Trade Barriers

The European Union (EU) is one of the world’s leading producers, consumers, and traders of beef; however, the U.S. share in EU beef imports has been sharply curtailed by a number of EU policies, beginning with the 1989 ban on hormone-treated beef. Before the ban, U.S. meat exports to the EU averaged 4,400 metric tons (mt) of beef muscle cuts and 68,000 mt of beef variety meats per year. In the year following the hormone ban, U.S. exports fell 86 percent for variety meats and 59 percent for beef muscle cuts.

In 1999, USDA’s Agricultural Marketing Service introduced the Non-Hormone Treated Cattle (NHTC) program, which certifies beef for export to the EU. Under that program, U.S. beef exports to the EU grew slowly but steadily, reaching 17,286 mt in 2013. This makes the United States the fourth-largest exporter to the EU. U.S. exports to the EU tend to be higher value, grain-fed products, with an average unit price of $5.71 per pound in 2013, compared to $3.32 per pound for imported products from Brazil (the largest exporter to the EU).

Although the NHTC program has facilitated a rise in U.S. exports to the EU, further export growth is limited by tariff-rate quota (TRQ) levels. The High-Quality Beef (HQB) quota from 1997 to 2009 established a TRQ of 11,500 metric tons at a 20-percent ad valorem tariff rate for U.S. and Canadian beef. In 2009, the EU expanded access for U.S. beef to 45,000 mt (quota free); however, like the HQB, imports above the quota are still taxed at the much higher rate. Despite high fixed costs to enter the NHTC program, U.S. producers responded to the increased TRQs with large increases in production. If EU’s TRQ amounts are increased further through a free trade agreement or other negotiations, U.S. producers could likely respond to produce more exports. If the hormone ban was removed without TRQ reform, all U.S. beef would be eligible for export to the EU, but TRQs could still limit trade expansion. 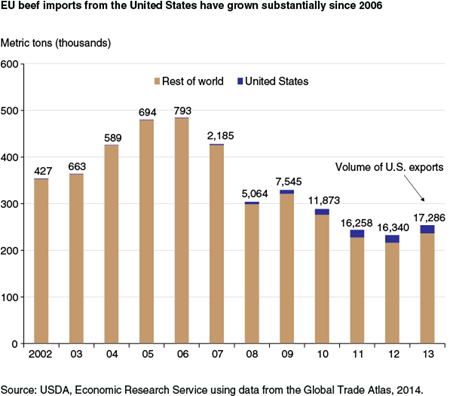