In 2013, U.S. consumers spent $703.9 billion on food and other grocery products in supermarkets, supercenters, and grocery stores, an inflation-adjusted 1.2-percent increase from 2012. Within this group, supermarkets and grocery stores have reported small or negative inflation-adjusted annual sales growth during the last decade, averaging an increase of just 0.7 percent per year. (Food generally makes up at least 75 percent of grocery sales, and the remainder is sales of paper goods, cleaning supplies, health and beauty products, and pharmacy items.) Industry analysts report that following the 2007-09 recession, more consumers are looking to save money on their food and grocery spending, shifting some of their grocery purchases to other types of retailers such as wholesale clubs, dollar stores, and e-commerce.

The sales shares held by the largest U.S. grocery retailers (including supercenters) have decreased slightly since 2008. Sales by the 20 largest grocery retailers totaled $449.3 billion in 2013, accounting for 63.8 percent of U.S. grocery sales. This share is an increase from 39.9 percent in 1993, but down from their sales share peak of 65.1 percent in 2008. The four largest grocery retailers—Wal-Mart Supercenters, Kroger, Safeway, and Publix Super Markets—accounted for 36.4 percent of total grocery sales in 2013, a 1.7-percentage point drop since 2008. Wal-Mart Supercenters maintained their number one spot, with grocery sales that were 53 percent higher than second-place Kroger. Wal-Mart’s food and nonfood grocery sales amounted to an estimated $117.4 billion in 2013; in comparison, Kroger had sales of $76.7 billion.

The shares of sales held by the largest U.S. grocery retailers are likely to become more concentrated during the next few years due to the combined effects of two major trends. First, an anticipated wave of mergers and acquisitions will be an important factor, producing more concentrated food industry sales shares following two major acquisitions in 2013. In the first quarter of 2013, Supervalu sold five retail chains—Albertson’s, Acme, Jewel-Osco, Shaw’s, and Star Market—to AB Acquisition LLC. Meanwhile, Kroger secured its hold on second place by acquiring Harris Teeter during the middle of the same year. Additionally, Albertson’s agreed to acquire Safeway in the first quarter of 2014, and the sale was confirmed by shareholders in July 2014. The continued steady growth of supercenters such as Wal-Mart and Target will also be a major factor contributing to rising sales shares among top U.S. grocers. 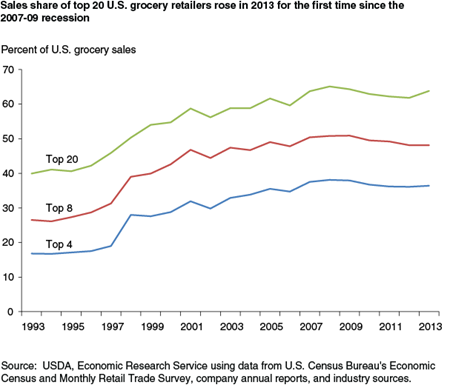