Double Cropping by U.S. Farmers Varies Over Time and Regionally

by Allison Borchers and Steven Wallander

Growing demand for agricultural commodities over the last decade has created incentives for farm operators to increase production. While some farmers responded to these incentives by expanding their cropland acreage, another way to expand production is by using existing cropland more intensively. Double cropping—the harvest of two crops from the same field in a given year—is one form of intensification.

Such year-to-year variation in double cropping is often due to factors such as changing market signals or weather. While these factors reflect broad national trends, commodity price expectations tend to cause farmers to grow certain crops more than others, and weather conditions tend to affect farmers located in some regions more than others. Climate (i.e., long-term as opposed to short-term weather patterns) also has a direct effect on the extent and types of double cropping undertaken regionally, and largely explains longer term regional differences. High double cropping acreage in the Southeast likely reflects a longer growing season available to farmers in that region. Double cropping trends in the Southeast largely drive national-level trends, although the Midwest and Southern Plains also have sizeable double-cropped acreage.

However, whether the growing season length poses a constraint depends upon which crop combinations a farmer is considering. Farmers in more northern regions, which have shorter growing seasons, regularly grow winter crops. Interestingly, the Northeast has the highest rate of double cropping (total double-cropped acreage divided by total cropland acreage), averaging 9.58 percent annually. While some double cropping combinations, such as soybeans and winter wheat, might not do well in those regions due to growing season constraints, high rates of double cropping in the Northeast suggest these constraints can be overcome. As research continues to examine double cropping management practices and combinations, and with increases in availability of seed varieties (such as early maturing varieties), it is possible that there could be increased opportunities to double-crop throughout the United States. However, for now, double cropping continues to represent only a small part of U.S. agricultural production activity. Nationally, double cropping occurred on only about 2 percent of total cropland in most years. 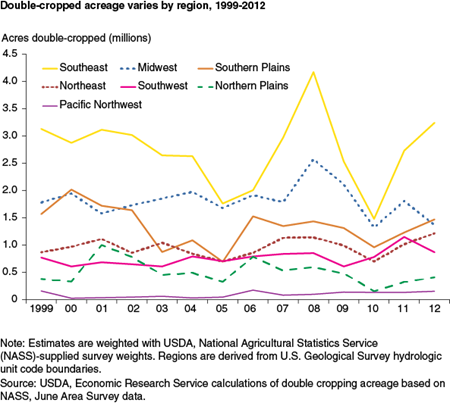