by Lindsay Kuberka and Keithly Jones

The South Korea-United States (KORUS) free trade agreement (FTA), which became effective in 2012, promotes trade through the reduction or elimination of tariffs. Even before the signing of the FTA, U.S. dairy exports to South Korea were growing at an average annual rate of 21 percent, from $40.4 million in 2002 to $222.3 million in 2011. Recently, U.S. dairy products have become more competitive with products from other dairy exporting countries. This increase in competitiveness is expected to continue due to the relaxation of tariffs and tariff rate quotas resulting from the FTA.

Dairy production and consumption have expanded rapidly in South Korea, but 73 percent of milk production is used for drinking milk, leaving little for products like cheese and butter. South Korea relies on dairy imports to fill those production gaps. Four principal countries—the United States, European Union, New Zealand, and Australia—supply most of the imports.

ERS researchers found that the recently enacted FTA will increase South Korean aggregate dairy product imports from all countries, even those without an FTA. Increased exports will accrue primarily to the United States and to the European Union, which enacted a similar FTA with Korea in 2011. Taking into account reductions in tariff rates from both KORUS and the South Korea-European Union FTAs, Korean consumers will face lower prices for dairy products, resulting in higher total purchases. The ERS study, focusing on whey, butter, and cheese, estimated long-term (3 to 5 years after the FTA starts) total import demand and then distributed demand by source country.

Overall, the results suggest that South Korean imports of whey, butter, and cheese will all increase significantly, with the United States and European Union increasing exports of all three products, and the rest of the world showing export gains only for whey. Recent trade data support these findings. South Korean dairy product imports grew from $448.7 million in 2010, the year before either FTA was enacted, to $703.3 million in 2013. Cheese imports have risen the most, as higher numbers of fast food outlets and greater adoption of Western diets have boosted demand for cheese. Imports of cheese rose from 61,000 metric tons in 2010 to over 85,000 metric tons in 2013, about 15 percent more than the study’s estimated impacts.

Research also suggested that countries offering the lowest prices would see the largest increases in trade. Study results suggested that the U.S. would have the greatest price advantage for cheese, and projections show a rise in the U.S. import share of cheese from 30 to 50 percent within the first 3 to 5 years after the FTA. Actual impacts have already matched expectations, as the U.S. reached a 50-percent market share in 2013. 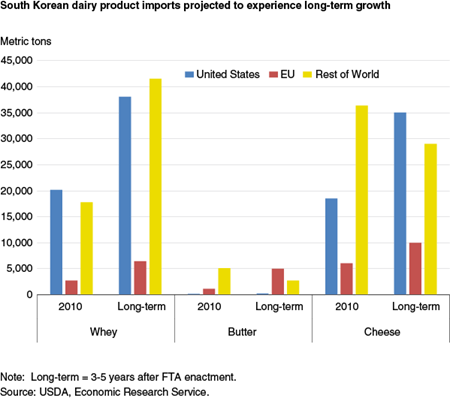