The Rise of Foreign Wine Demand in China

Rising education, income, and Westernization has led to China’s emergence as a major player in global wine trade. In 2000, China ranked 51st in the world with just $4.9 million in bottled wine imports, making it significantly smaller than major importers such as the United Kingdom ($2.1 billion) and United States ($1.9 billion). By 2011, China's imports increased to $1.3 billion, making it the 5th largest bottled wine importer in the world.

Chinese wine consumers are placing increased importance on perceived prestige, status, and respect. Consequently, quality imported wines have become the choice of many high-end consumers. The growth in Chinese wine imports and the apparent preference for high quality raises questions about future trends in Chinese wine imports. In particular, as the Chinese economy grows and incomes rise, which exporting countries are likely to benefit as more income is allocated to foreign wine?

Using China Customs data on bottled wine imports during the period from 2002–2011, ERS researchers analyzed foreign wine demand in China by origin (France, Australia, United States, etc.). The study used an economic modeling procedure that accounted for changes in the responsiveness of wine imports by source to changes in export prices and total wine expenditures over time. Results of the study include estimates of the marginal expenditure share for the exporting sources over time. Marginal expenditure shares show how a $1 increase in total wine imports is allocated across the exporting countries and measure the change in wine imports from a particular country in response to that $1 increase. For instance, in the first quarter of 2011, for every $1 increase in total wine imports, China spent $0.55 on French wine, $0.20 on Australian wine, $0.09 on Italian wine, $0.03 on Spanish wine, $0.03 on Chilean wine, $0.02 on American wine, and $0.08 on wine from all other sources.

The results suggest an increasing preference for wine from traditional Old World suppliers like Italy and France, likely due to wine from these countries being perceived as higher quality. Evidence suggests that the Chinese wine market will continue to grow, creating opportunities for all exporting countries. However, given the status of French wine among Chinese consumers, the growth of U.S. wine exports to China will likely not be as strong. 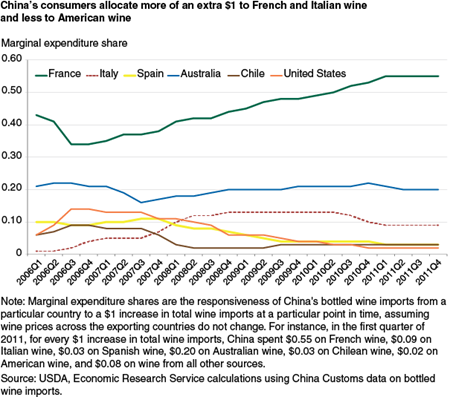