Fresh fruit and vegetable prices are among the most volatile retail food prices observed in the United States. One potential source of this volatility is the price of oil, as fresh fruits and vegetables often travel long distances from field to consumer. As of 2010, California accounted for half of the U.S. fruit acreage and Florida for a fourth. Most produce is highly perishable, and refrigeration significantly increases transportation costs. Given that fresh produce undergoes minimal processing and packaging, transportation costs—including the oil to fuel the carriers—are an important component of wholesale, and in turn, retail prices.

To quantify the impact of oil price increases on wholesale fruit and vegetable prices, ERS researchers chose six commodities—asparagus, cantaloupes, bell peppers, grapes, oranges, and tomatoes. All six are grown domestically and imported. The import share of domestic supply in 2007-08 ranged from 8.5 percent for oranges to 81.7 percent for asparagus. Researchers used shipment and price data from USDA’s Agricultural Marketing Service for 13 wholesale (terminal) markets from 2000 to 2008, providing an array of transportation routes and modes.

Researchers found that the impact of oil price increases on wholesale produce prices depends on both the commodity in question and the route traveled. Produce grown in the United States, Canada, and Mexico is shipped primarily by truck, which has relatively high fuel costs per pound of produce. However, produce from South and Central America is more likely to be shipped by plane or by boat, both of which are far less fuel-intensive.

Researchers measured the expected effect of a hypothetical doubling of oil prices by calculating the estimated relationship between oil prices and wholesale fruit and vegetable prices. The potential impact of such an increase in oil prices can be quite large, particularly for produce shipped from within North America. For example, the expected impact of a doubling of oil prices on asparagus from California—typically transported by truck—is about a 27-percent increase in wholesale price. For asparagus from Peru—typically transported by ship or plane—wholesale prices would be expected to rise by only 12 percent, illustrating the importance of the method of transport.

Price volatility typically decreases along the food supply chain, with farm prices exhibiting the most volatility, followed by wholesale prices, and then retail prices. Therefore, a doubling of the price of oil would be expected to have somewhat smaller impacts on the prices consumers pay for produce at the supermarket than on wholesale prices. 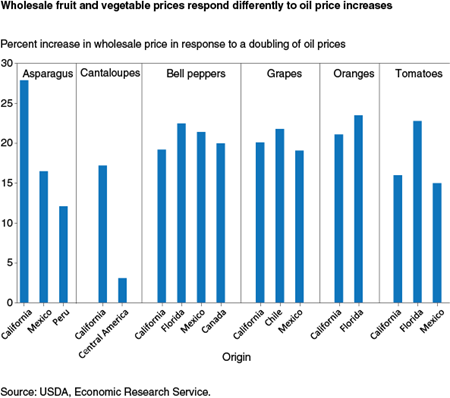