From 1977 to 2012, commercial pork production in the United States increased 174 percent from slaughtering more and bigger hogs. Public and private research and development during the period led to efficiency gains that have altered the structure of the pork industry. Some of the gains in productivity are attributable to increases in the scale of production and technological innovation. A major contributing factor is genetic improvement of animals from lard-producing hogs prior to the 1980s to leaner meat-type hogs, which is evident in improvements in meat quality and weight gain per animal. Average dressed weight of barrows and gilts (young male and female hogs, respectively) has increased 25 percent since 1977, from an annual average of 163 pounds in 1977 to 203 pounds in 2011.

The restructuring of the U.S. pork industry has also resulted in an increase in the number of live hog imports from Canada, as well as a shift in the makeup of those imports. Prior to 1990, nearly all live hog imports were slaughter hogs from Canada that went directly to pork processing plants. A shift in the live-import mix occurred in the mid-1990s after implementation of the North American Free Trade Agreement and the rise of contracting in domestic pork production. The U.S. and Canadian hog industries are now closely integrated, which has furthered the evolution of U.S. production. Since 2005, more than 60 percent of U.S. live hog imports have been feeder pigs from Canada, to be fed to their slaughter weight in the United States. These Canadian-born hogs are a key component of U.S. pork production. According to ERS calculations, 5.5 percent of U.S. pork supplies come from live hogs imported from Canada. 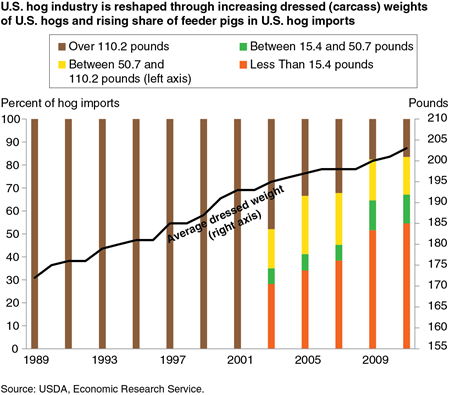