by Jason Brown and John Pender

ERS researchers, in collaboration with researchers from the Lawrence Berkeley Laboratory and the National Renewable Energy Laboratory, recently completed a study of the effects of windpower development on county-level income and employment in 12 States of the wind-richGreat Plains and Rocky Mountain regions. In contrast to prior studies of economic impacts ofwind power, which have relied on information from project-level case studies or model-basedestimates, this study used econometric analysis of county-level income and employment datato assess impacts of wind power development on economic outcomes.

The findings reveal an aggregate increase in county-level personal income and employment of approximately $11,000 and 0.5 jobs per megawatt of wind power capacity installed over the study period 2000 to 2008. These estimates appear broadly consistent with model-based results and translate to a slight median increase in total county personal income and employment of 0.2 percent and 0.4 percent for counties with installed wind power.

The typical county in the study region with installed wind turbines (approximately 12 percent of counties) had capacity in place in 2008 that could generate approximately 377,000 megawatt-hours of electrical power, enough to power about 37,000 homes for 1 year. The analysis controlled for other factors that affect county-level income and employment. The results primarily reflect the effects of wind turbines in operation, but they also capture construction phase impacts from projects that were under construction in 2008 or came on-line during the latter half of the study period. 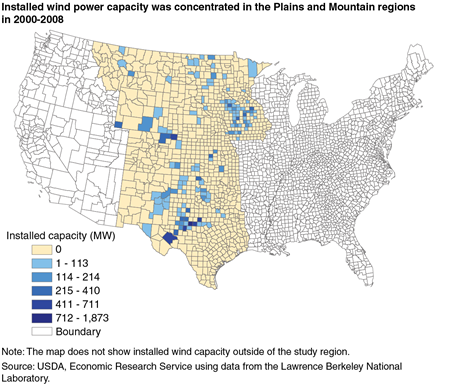