According to ARMS data, neither cotton enterprise size nor farm size had much impact on average costs per planted cotton acre in 2007. Many operators with small cotton operations held down their machinery ownership costs by relying on custom workers for harvesting cotton. Custom workers supply labor and use their own machinery.

Most cotton production takes place on very large farms with gross annual sales of $1 million or more. These farms do not always have a large number of cotton acres. The Southwest (primarily Texas) is a major cotton production region. In 2007, this region experienced unusually good cotton growing conditions and accounted for 47 percent of U.S. production. However, Southwest producers experience more risk over time: they are more specialized in cotton--they produce few alternative commodities, and cotton accounts for a large share of their total value of agricultural production--and their cotton yields are volatile. These producers are more likely than thosein other regions to cover their risk by purchasing crop insurance. 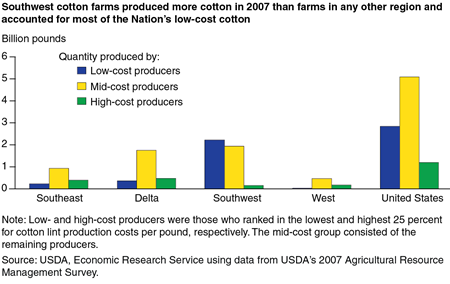