Genetically engineered varieties of corn, cotton, and soybeans with enhanced pest management traits, such as insect resistance and herbicide tolerance, have been widely adopted by U.S. farmers. Insect resistant crops (Bt crops) contain a gene from a soil bacterium, Bacillus thuringiensis, which produces a protein that is toxic to specific insects. Bt corn with traits to control the European corn borer was introduced commercially in 1996, and additional traits to control other types of insects were introduced in 2003 and in subsequent years.

Corn farmers have experienced significant changes since Bt corn was first introduced. Corn borer infestations have decreased considerably; new traits, such as corn rootworm and corn earworm resistance, have been engineered into Bt seeds, and many input costs have increased. Each of these changes has the potential to alter the farm-level costs and benefits of adopting and continuing to plant Bt corn. ERS researchers recently examined data from USDA’s 2005 Agricultural Resource Management Survey (ARMS) to determine the reasons farmers planted Bt corn and the resulting impact on corn yields, profits, and insecticide use.

At the time of the survey, about 38 percent of corn farmers had adopted Bt corn, although adoption rates varied by region. Over three-quarters of those farmers who had adopted Bt corn indicated that they did so to increase yields. Other reasons cited include the potential for reduced pesticide costs or savings to management time. ARMS data show that Bt adopters had higher yields, on average, than corn producers planting conventional seeds in 2005. Corn yields were about 17 bushels per acre higher for adopters than for nonadopters, on average, as were variable profits, while insecticide use was lower.

Simple comparisons of averages can be misleading because adopters and nonadopters can differ in ways other than the seeds they plant. Using econometric techniques to adjust for these differences, the researchers confirm that Bt adoption was positively associated with increased variable profits and yields in 2005. More specifically, they found that a 10.0-percent increase in Bt adoption was associated with a 1.7-percent increase in corn yields and a 1.65-percent increase in variable profits (those profit increases were largely driven by the yield gains). However, the results suggest that Bt adoption was not significantly related to insecticide use. This may be related tolow insect-infestation levels in 2005. For instance, Bt corn use suppressed areawide European corn borer infestations. This suggests that by reducing pest populations, Bt corn benefited not only Bt adopters but nonadopters as well. 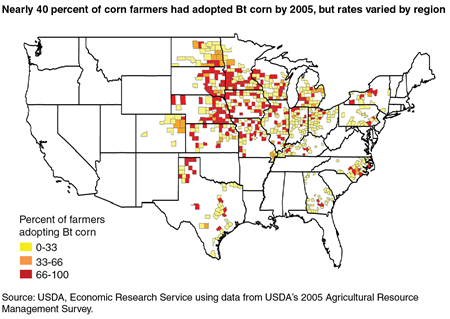