by Paul Westcott and Lihong McPhail

Declining use of gasoline in the United States combined with market constraints to future growth in the blending of biofuel have resulted in U.S. ethanol use falling short of the Federal Renewable Fuel Standard (RFS), energy legislation that specifies minimum annual levels of biofuel consumption in the United States through 2022. For many years, U.S. ethanol use exceeded mandates; now, however, ethanol mandates exceed use. That development reflects, in part, a decline in U.S. gasoline use from a peak of 142 billion gallons in 2007 to about 133 billion gallons in 2013, thereby reducing the size of the market that ethanol is entering.

Nearly all retail gasoline sold in the United States is a 10-percent ethanol blend (E10). Infrastructural and other factors limit the ability to expand usage of higher ethanol blends, such as E15. This creates an effective constraint on the overall use of ethanol at a level near 10 percent of total gasoline consumption, the so-called E10 blend wall. As a result, ethanol use is falling short of the portion of the RFS that can be met with ethanol derived from corn starch. The gap will widen in the future as gasoline consumption declines further while the RFS continues to increase. As a consequence, corn used to produce ethanol in the upcoming 2013/14 crop year is projected to increase only moderately from the drought-reduced level of the current year.

These market developments spurred a sharp increase in prices for Renewable Identification Numbers (RINs) at the beginning of 2013. RINs are codes assigned to batches of renewable fuel produced in or imported into the United States, such as ethanol and biodiesel. Obligated parties (producers and importers of gasoline or diesel who do not meet certain exemptions) use RINs to report qualifying biofuel use to the U.S. Environmental Protection Agency (EPA) to demonstrate compliance with annual RFS requirements. RINs may be used for compliance, sold, or held for the following year’s compliance (subject to limits). These alternative uses of RINs are intended to provide some flexibility to obligated parties in meeting the RFS.

Additional factors may also be affecting RIN prices. These include uncertainties regarding EPA implementation of the RFS for 2014 and beyond, penalties that EPA might impose on obligated parties who are unable to meet ethanol mandates or who fail to acquire sufficient RINs for their compliance requirements, and the potential for new legislation to modify the RFS to address current market constraints. 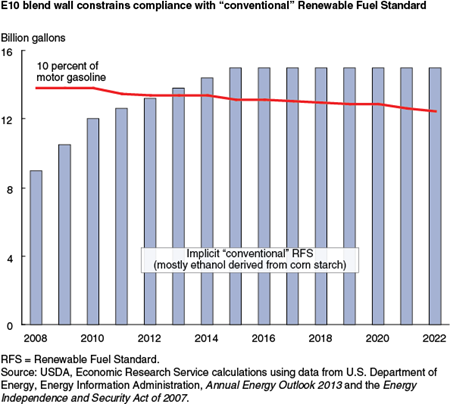