How Much U.S. Meat Comes From Foreign Sources?

Meat from foreign sources accounts for roughly 8-20 percent of total U.S. meat supplies, but only the portions that are imported directly as meat are obvious. While it is relatively easy to track the amount of meat imported by the U.S. (2.1 billion pounds of beef and 0.8 billion pounds of pork in 2011) and the number of livestock that enter the U.S. (2.1 million cattle and 5.8 million hogs in 2011), it is more difficult to estimate the amount of meat produced in the United States from animals that originated abroad. ERS estimates derived using data on imported livestock by weight category and assumptions about animal growth patterns and the timing of production from imported animals show the share of domestic production attributed to foreign-born animals is significant and trending upward.

Most U.S. livestock imports come from Canada and Mexico. The high costs associated with quarantine requirements and transportation limit imports from other countries. Consolidation and other structural changes in North American livestock production have resulted in an increase in U.S. imports of certain categories of livestock. This trade is primarily driven by weather and pasture conditions in Canada and Mexico, U.S. feeder cattle prices, and currency exchange rates.

Beef production systems in Canada are similar to those in the United States--both countries produce high-quality, grain-fed beef. The United States imports live cattle from Canada for immediate slaughter, feeding, breeding, and dairy purposes. U.S. cattle imports from Mexico are primarily lightweight feeder cattle that are put on pasture or, if large enough, placed directly in feedlots. U.S. imports of Mexican cattle initially declined after implementation of the North American Free Trade Agreement in 1994 but gradually increased, particularly in 2003-05, when restrictions were placed on Canadian cattle following an outbreak of bovine spongiform encephalopathy (BSE). Nearly all hogs imported into the United States are feeder hogs, and most originate in Canada.

According to ERS calculations, foreign-born cattle accounted for an average of 8.1 percent of total monthly U.S. beef production over the last 13 years. When that amount is added to the annual average of 2.9 billion pounds of beef and veal imported from all foreign sources, almost 16 percent of annual U.S. beef and veal supplies is estimated to originate abroad. From 1995 through 2008, Canadian hogs contributed about 93 million pounds per year to U.S. pork supplies. When this amount is combined with the 895 million pounds of pork imported by the U.S. each year, foreign sources are estimated to account for about 8.4 percent of total U.S. pork supplies. 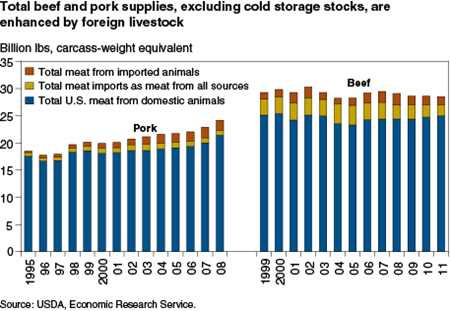