by Mathew Shane and Mitch Morehart

Bolstered by strong demand from developing countries, the falling dollar, and the growing importance of biofuels, U.S. agriculture enjoyed several years of high prices and strong demand prior to the 2008-09 recession. The same factors helped maintain high agricultural prices throughout the recession. Agriculture's relatively strong balance sheets and low overall use of debt entering and exiting the recession provide a financial base for future growth.

Because of strong demand for agricultural commodities and products, real U.S. farm income has been robust since 2004. This period of growth enabled farmers to improve their overall liquidity and strengthen their balance sheets. Gains in farm income also increased farmland values by raising expectations of future income flows. Inexpensive and accessible credit lowered the cost of financing farmland purchases and contributed to the surge in farmland values. As a result, farm financial assets grew by 31 percent and farm equity by 32 percent between 2004 and 2012. 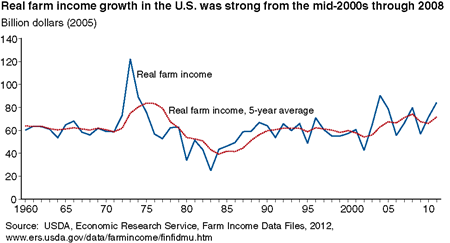 Farm income dipped slightly in 2009 for most farm businesses. However, farmers were cushioned by good liquidity and low debt levels. The combination of rising farm income and land values, along with the likelihood of continued low interest rates over the near term, points toward farm business stability over the next few years.

Due to continued growth in farm earnings, farmland lost far less value during the recession than commercial and residential real estate. Some concerns arose that volatility in urban real estate markets over the last decade would spill over into markets for farmland, since farmland near urban areas derives value from its development potential. Findings from a recent ERS study of farmland values and ownership suggest otherwise. During the housing market downturn (2007-09) that affected all but the Plains and Delta regions, farmland values generally declined by less than rural housing values. And during the 'boom' years of the U.S. housing market (2001-06), farmland values grew faster than rural housing values in many States.

U.S. farmers, by being cautious with debt financing, have generally avoided the problems in other sectors that are heavily reliant on debt. The debt-to-asset ratio for farm businesses has trended lower since the mid-1980s and is far lower than the ratios of corporate and noncorporate nonfarm businesses. Low debt use--as reflected in the debt-to-asset ratio and the interest coverage ratio--reduces both variability in net income and incentives for excessive risk taking. A high percentage of assets financed through debt indicates greater leverage and more financial risk. Overusing leverage leaves farms at risk, since the cost of financing this borrowing (interest payments) can outweigh the return provided by the expansion. Lower use of debt leverage by farms indicates fewer potential conflicts between lenders and farm business owners over risk and asset choices.

Interest coverage ratios, which are calculated by dividing a company's earnings before interest and taxes by the interest expenses, show a similar picture of relatively low debt burdens for farmers. Since 1990, interest coverage ratios for farm businesses have exceeded those of nonfarm, noncorporate businesses and corporate businesses. The relatively low debt use by agriculture reflects the conservative nature of farmers and their primary lenders, which has reduced the sensitivity of agricultural returns and equity to fluctuations in the general business cycle.

Within the farm sector, the use of debt leverage--and thus exposure to liquidity problems--tends to be higher for larger farms, livestock producers, and younger farmers. However, farm delinquency and default rates are expected to be stable in 2012-13; interest rates are expected to remain low for highly qualified farm borrowers; and farm commodity prices are expected to remain relatively strong. Based on data from the Federal Reserve Bank of Kansas City and the Farm Credit System, farmers remained cautious in their use of debt in 2011, as non-real estate farm debt was roughly unchanged in the first half of 2011 and farm real estate debt grew a modest 2.2 percent.

U.S. Agriculture Has Exhibited Much Less Financial Stress Than Other Sectors

Agriculture has benefited from the health of its two primary lenders: rural commercial banks and the Farm Credit System. These two institutions held over 85 percent of farm debt in 2010. This institutional stability has enhanced the farm sector's ability to obtain credit and favorable interest rates. 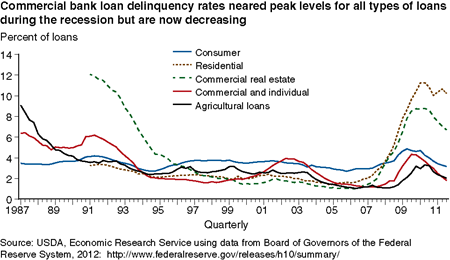 U.S. agricultural exports rebounded quickly in 2010 and 2011, rising 18 percent in both years in nominal dollars relative to the previous year and exceeding $136 billion in 2011. The growth in the nominal value of post-recession exports was about twice the historical average between 1998 and 2007, the decade preceding the recession.

Two basic factors underlie the increase in the rate of export growth. First, U.S. agricultural export growth is increasingly dependent on developing countries and benefited from their relatively strong economic performance during 2008-11. The developing-country share of U.S. agricultural exports rose to more than 60 percent in 2011, up from 40 percent in 1998. Differences in economic growth rates between developed and developing countries have been increasing for some time, and the 2008-09 recession reinforced this pattern. While economic recovery lags in developed countries like the United States, the European Union, and Japan, developing countries have generally been able to sustain or resume relatively high rates of growth. Although near-term growth has slowed in China, India, and some other developing countries as they try to contain inflationary pressures, overall prospects are for relatively high sustained growth in developing-country markets. 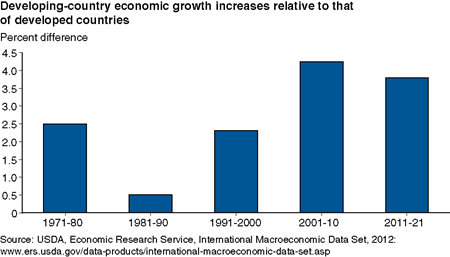 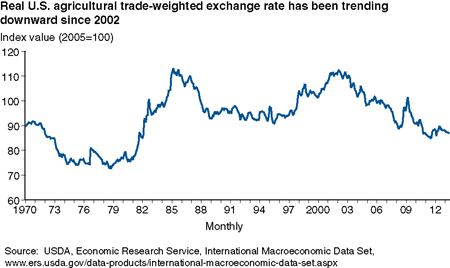 The world economic recovery was underway in 2011 and 2012 and is likely to continue in 2013, with developing countries in Asia, Latin America, and Africa leading the way. But the world economy and U.S. agriculture still face challenges. The U.S. economic recovery can be expected to be weaker following a relatively deep recession with profound financial consequences. The Eurozone crisis is likely to dampen growth prospects in developed countries, and the falling value of the euro against the dollar is constraining U.S. agricultural exports to EU markets. As a result, although farm sector receipts and farmland values remain strong, growth has slowed from the pre-recession period.

Still, U.S. agriculture weathered the recession and uneven economic recovery better than other industries. From both a trade and financial perspective, agriculture was and is better positioned than most U.S. industries. While the world economy is dynamic and increasingly competitive, U.S. agriculture's natural comparative advantage, low interest rates, competitive exchange rate, and solid balance sheet suggest its continued strong presence in world markets for the foreseeable future.