Most segments of the U.S. organic farm sector have expanded since USDA set uniform organic standards in 2000. About 50 organic certification programs—State and private—are currently accredited by USDA to certify U.S. farmers, ranchers, and processors, about the same as before USDA made certification mandatory. USDA’s organic rules also streamlined organic import procedures, and over 40 foreign programs are now accredited to U.S. standards.

Certified organic crop acreage increased 11 percent between 2001 and 2003, with large increases for fruits and vegetables and for hay crops used in dairy. Overall, certified organic acreage declined slightly in 2002 from the previous year, as USDA implemented national organic rules, but rebounded in 2003. Farmers in 49 States dedicated 2.2 million acres of cropland and pasture to organic production systems in 2003. Nearly 1.5 million acres were used for growing crops. California, North Dakota, Minnesota, Montana, Wisconsin, Colorado, and Iowa had the most organic cropland, and Texas, Alaska, and California had the largest amount of organic pasture and rangeland. Certified organic cropland accounted for 0.1 percent of U.S. pasture and 0.4 percent of U.S. cropland, although the share is much higher in some crops, such as vegetables at nearly 4 percent and fruit at about 2 percent. 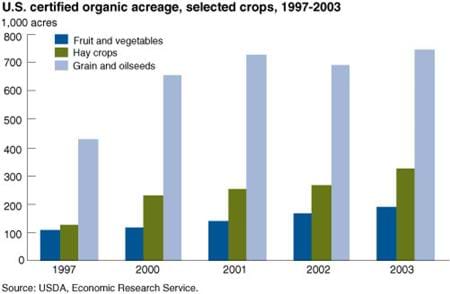 The number of certified organic livestock animals—beef cows, milk cows, hogs, pigs, sheep, and lambs—increased more than fivefold from 1997 to 2003, and rose 15 percent between 2002 and 2003 alone. Dairy has been one of the fastest growing segments of the organic foods industry. Milk cows accounted for over half of the certified livestock animals during 1997-2003, and organic milk cows accounted for 1 and 2 percent of the total in California and Wisconsin, the two top dairy States for both organic and conventional production in 2003.

Organic cotton and soybeans acreage declined after 2001, despite growth in retail sales of organic cotton and soy-based products. Import competition likely played a role in this. USDA’s Foreign Agricultural Service estimates that the value of U.S. organic imports was $1.0-$1.5 billion in 2002, while the value of U.S. organic exports was $125-$250 million. Although consumer spending on organic foods is still small—approximately 2 percent of at-home food sales in 2003—rapid growth is expected to continue in the U.S. and other major markets, while the competition for these markets is likely to increase considerably.

Organic pasture and rangeland also declined (6 percent) between 2001 and 2003, mostly for rangeland in the West. As USDA implemented uniform organic standards—including stringent standards for livestock—some organic ranchers switched to the natural meat market exclusively. Although natural meat products may be produced under private standards that go beyond USDA’s guidelines, natural meat producers are not prohibited from using antibiotics in production and are not required to use certified organic feed grains or pasture or provide cows with access to pasture.