by Barry Krissoff and John Wainio

The U.S., traditionally a net exporter of fruits and vegetables, has become a large net importer, with imports more than doubling between 1994 and 2004 to reach $12.7 billion. U.S. exports of fruits and vegetables have also risen but less rapidly, reaching $9.7 billion in 2004. The surge in imports can be traced to a growing consumer demand for produce from tropical regions, produce that complements U.S. seasonal patterns of production, and produce that competes directly with U.S. production. Because of geographic proximity and low or zero tariffs, Canada and Mexico are among the largest sources and destinations of U.S. trade of fruits and vegetables.

U.S. produce exports are growing more slowly than imports partly because they are constrained by high tariffs and slow economic growth in importing countries. The global average tariff for the fruit and vegetable sector is over 50 percent, with tariffs varying substantially across products and countries. In general, the United States maintains lower tariffs than most of its trading partners. Nearly 60 percent of U.S. tariffs on produce are less than 5 percent, and over 90 percent are under 25 percent. Countries belonging to the Organisation for Economic Co-operation and Development (OECD), which together import about 85 percent of the value of world fruit and vegetable trade, are characterized by a relatively large number of low tariffs and a small number of very high tariffs. For example, most Japanese and European Union fruit and vegetable tariffs range from 5 to 25 percent. In contrast, over half of all official tariffs of non-OECD countries exceed 25 percent, although in practice, non-OECD developing countries tend to maintain lower tariffs. 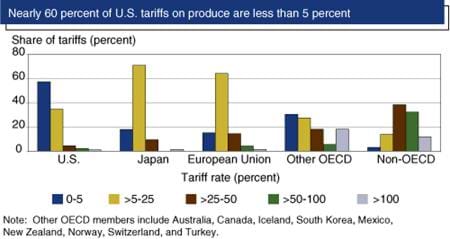 Market forces and government policies also are key factors shaping U.S. fruit and vegetable trade. The recent decline in the dollar—down about 11.6 percent in real terms since 2002 against a basket of horticultural trading partners—has made American fruits and vegetables relatively less expensive than those of most U.S. competitors in importing countries. The main exception is China, which has maintained a fixed exchange rate with the dollar, and China’s horticultural products have begun to compete head-on with U.S. products in important third-country markets such as Japan. Partly in response to growing international competition, in December 2004, Congress passed the Specialty Crops Competitiveness Act, which (although not currently funded) authorizes promotional campaigns and technical and financial assistance designed to enhance the competitiveness of U.S. fruits and vegetables. Additionally, ongoing World Trade Organization negotiations, as well as regional and bilateral trade agreements, may lead to reductions in tariff and nontariff measures faced by U.S. fruit and vegetable growers in global markets.