ERS provides authoritative information on the financial health of the farm sector, including the performance of farm businesses and well-being of farm households. In the most recent statement, ERS forecasted a 13 percent decline in 2018 net farm income relative to 2017 estimates. Over the same time period, the median income of farm operator households is expected to decline less than one percent. Published three times a year, these core statistical indicators provide guidance to policy makers, lenders, commodity organizations, farmers, and others interested in the financial status of the farm economy.  ERS’s farm income statistics also inform the computation of agriculture’s contribution to the gross domestic product for the U.S. economy in the Bureau of Economic Analysis statistics for Gross Domestic Product.

Farms and farm households were expected to see lower tax rates regardless of size or commodities grown.

The Tax Cuts and Jobs Act (TCJA) of 2017 made significant changes to the Federal income tax system, including individual and business income tax rates, business expenses, taxable income deductions, and the alternative minimum tax. The TCJA also doubled the Federal estate tax exclusion. An ERS report examined changes in the average effective tax rate of family farm households as a result of the new law, finding that average tax rates are estimated to decline across all farm sizes and commodity specializations. Declines were greatest for midsize and large farms. 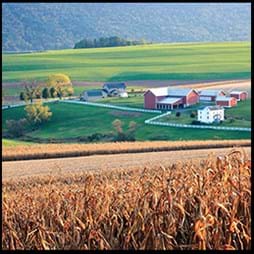 Farmland appreciation from 2000-2012 lowered the share of financially stressed farms.

Farm real estate values reached record highs in recent years, more than doubling from $1,483 per acre in 2000 to $3,060 per acre in 2015. ERS analysis shows that the likelihood of financial stress fell most among those who owned less than one-quarter of their acres operated. Also, farms in the Heartland that owned at least 50 percent of their cropland acres—disproportionately operated by older, more experienced farmers—borrowed more and purchased more land during periods of high appreciation and land equity gains. Thus the gradual transfer of land between generations from more experienced to less experienced operators may slow during periods of rapid appreciation, while young and beginning farmers may find it easier to purchase land when land prices level out or decline.

Changing farm structure has led to changes in the distribution of income support over time. 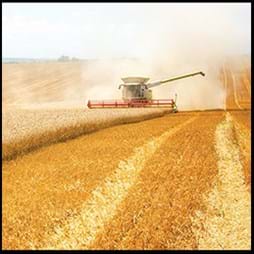 Agricultural production has shifted to much larger farming operations over the last three decades, even as the number of very small farms grows.

Based on detailed farm-level data, an ERS report measured trends in consolidation and tracked developments in farm-level specialization as well as the organization of farming businesses. Consolidation of production and acreage into larger farms has been persistent, widespread, and pronounced in crop production. Structural change has been quite dramatic in some livestock commodities—such as dairy, egg laying, and hogs—but consolidation has been modest or nonexistent in pasture/grazing land and in the associated cow-calf sector. The long-term shifts toward agricultural consolidation have occurred in tandem with a shift toward greater farm specialization. Despite increased consolidation, most production continues to be carried out on family farms.

A farm’s financial performance is commonly measured by net farm income, net cash farm income, and the farm household’s income or loss from the farm business. An ERS report examined returns to farming from a broader economic perspective, which also considers tax-loss benefits from farming and appreciation in the value of farmland assets. In 2015, 43 percent of U.S. farm households earned positive income from farming. Meanwhile, average farm real estate values increased nearly every year from 1990 to 2015. When tax-loss benefits (such as the ability to write off farm business losses against other household income) and the estimated appreciation in farmland values are considered, the share of farm households with positive returns from their farm operation increased to about 70 percent. 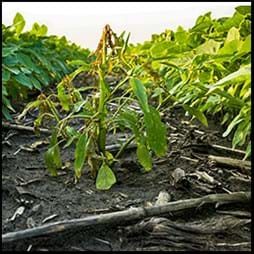 A variety of risk management programs are available to help crop and livestock producers mitigate losses to their income due to yield and price risk.

ERS researchers examined the landscape of risk management programs, the rules governing eligibility, the formulas that determine payments, and the effects of programs on both farm producers’ revenues and changes in those revenues. Using historical data as well as simu­lations, ERS illustrated the range of outcomes possible under different conditions, poli­cies, and coverage levels, offering insights into the scope and depth of risk management programs available to producers. The goal of the analysis was to provide information about the current set of programs and the environment in which producers operate for decision-makers involved in the 2018 Farm Bill policy-making process.

Released every month, commodity-specific reports provide up-to-date market analysis and short-and long-term projections of U.S. and world production, consumption and trade. These analyses also include timely analyses of the impacts of significant weather and other events. For example, the October 2018 Vegetable and Pulses report showed that despite severe weather evidenced by two successive hurricanes in 2018, U.S. markets exhibited steady to increased production for both fresh and processed vegetables. The December 2018 Wheat Outlook report focused on Australia, where a drought has had impact not only on production volumes, but also on use of wheat as a feed ingredient. The February 2018 Livestock, Dairy and Poultry report revealed that exports of U.S. beef experienced double-digit growth and reached a record high in 2017, due largely to sustained demand by Asian countries.

The 2018 USDA Baseline projections indicate that over the next several years, the agricultural sector continues to adjust to lower prices for most farm commodities.