Dedicating Agricultural Land to Energy Crops Would Shift Land Use.

Dedicated energy crops, such as switchgrass in the United States, have received much attention as potential renewable feedstocks for liquid fuels or bio-electricity. However, markets do not presently exist for large-scale use of this resource.  ERS examined three “what-if” scenarios that could create a market for bio-electricity using dedicated energy crops: a subsidy for bio-electricity generation, a national Renewable Portfolio Standard, and a national cap-and-trade policy to limit carbon dioxide (CO2) emissions. Results indicate that energy crops would occupy the greatest share of cropland in the Northern Plains, Southeast, and Appalachia.  Even though the impact of energy crop production on land use across the three scenarios is similar by design, the effects on other model outputs are quite different, including the mix of electric-generating technologies, the price of electricity, CO2 emissions, and the cost relative to a no-policy reference scenario.  All scenarios reduce U.S. CO2 emissions relative to the reference scenario. Findings were published in an ERS report and Amber Waves article, and has already been cited in the economics literature.

The success of GE HT corn, soybeans, and cotton led to the deregulation that enabled the commercialization of HT canola in 1998 and of HT alfalfa and sugar beets in 2005.  ERS uses data from USDA’s 2013 Agricultural Resource Management Survey (ARMS) to examine GE adoption rates among these three crops.  About 95 percent of U.S. canola acres (1.3 million acres) and over 99 percent of sugar beet acres (1.2 million acres) were harvested from GE seeds that year.  In contrast, only 13 percent of U.S. alfalfa acres were planted using GE seeds; this slower adoption rate is expected because alfalfa is a perennial crop and only about one-seventh of the alfalfa acreage is newly seeded each year. Farmers who planted GE HT alfalfa in 2013 had about 17 percent higher yields than farmers who planted conventional seeds. 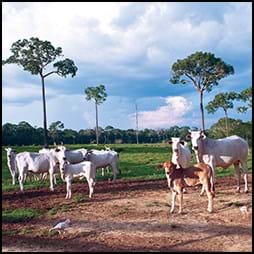 ERS examined the factors that influence the production of forest-risk commodities, including consumption of these commodities in other countries and barriers to international trade. This study (in response to a Congressional request) found that increasing global population and demand for food have led to rising agricultural production and demand for land and that expanded agricultural land has often come from tropical forest land. Deforestation in Argentina, Bolivia, Brazil, and Paraguay is linked with production of beef and soybeans, while deforestation in Indonesia and Malaysia is linked with production of palm oil and wood products. U.S. imports of palm oil are small relative to global production, and the United States has little influence on markets for palm oil. However, the United States is a major producer and consumer of other forest-risk commodities (beef, soybeans, and wood products) and—by increasing production and exports of these commodities—can reduce incentives for their production in tropical countries. With greater agricultural productivity, less area will be needed for agriculture and more land becomes available for forests The study also shows that the effects of removing tariffs on the production of forest-risk commodities depends on the level of exports and trade-liberalization across countries.

Conservation Compliance ties eligibility for most Federal farm program benefits to soil and wetland conservation. An ERS report found that Conservation Compliance is effective when the incentive—the farm program benefits that could be lost due to noncompliance—exceeds the cost of meeting soil and wetland conservation requirements.  Farmers’ application of approved conservation systems on highly erodible cropland (HELC) significantly reduced soil erosion and may have also encouraged erosion reduction on land where approved systems were not applied. Overall, compliance incentives under the Agricultural Act of 2014 were found to vary widely across farms with cropland in HEL fields, to approximate the overall level of incentive that would have been provided under the an extension of the 2008 Farm Act (although incentives changed significantly on many farms), and to be significantly lower on many farms if crop insurance premium subsidies were not subject to Conservation Compliance.  Compliance incentives for wetland conservation in the Prairie Pothole region of the Northern Plains are clearly larger than Compliance costs for an estimated 75 percent of wetlands that are already cropped or have characteristics favorable to crop production.  The report has been featured in press articles in many publications including Progressive Farmer, DTN, the Hagstrom Report, Agri-Pulse, and Agri-Net. 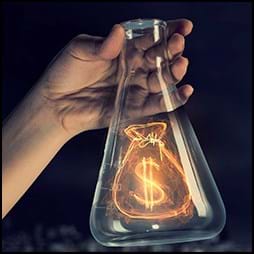 Economic experiments can be used to test existing and new approaches to conservation program delivery.

Economic experiments can help inform the design and implementation of government policies, especially when newly conceived. ERS, along with the ERS-funded Center for Behavioral and Experimental Agri-Environmental Policy Research, examined the use of economic experiments for building evidence to inform agricultural conservation policy. An ERS report illustrated the use of experimental approaches through a review of case studies in which experiments were used to investigate issues pertinent to agricultural policy design.  Laboratory and field experiments found, for example, that the costs of operating a voluntary program using auctions could be significantly reduced when information about potential participants is provided, that farmers prefer upfront payments rather than higher, future payments for conservation, and that farmer outreach can increase re-enrollment rates in the CRP and increase voter participation in FSA county committee elections. The research informed USDA and other Federal policymakers on how evidence-based policymaking can stretch program resources, and has led to further collaborations with USDA program agencies to improve the efficiency of their programs.

Pollinator forage suitability has been stable nationally over the past several decades, but declined in the Midwest.

Pollinator populations are under stress from a variety of sources, including pest, pathogens, pesticides, and poor nutrition.  Pollinators, including honeybees, benefit from a landscape that provides diverse forage - pollen and nectar of flowering plants. An ERS report reviewed the scholarly literature on how land use and programs such as the Conservation Reserve Program affect pollinator health, and examined trends in pollinator forage quality by region as land uses and land covers have changed in the United States over the last 30 years. These efforts also led to a podcast produced by NRCS’ National Conservation Training Center, a briefing with ARS pollinator researchers, and several presentations at academic conferences and policy workshops.