ERS provides up-to-date information on rural economic and demographic trends in an annual series, Rural America at a Glance. The latest report notes that population stabilized in rural areas in 2015, after declining every year from 2010 to 2014. Unemployment continued to decline in rural areas last year, falling close to levels last seen before the Great Recession. This is due, in part, to fewer people seeking work as the share of the rural population working remains well below pre-recession levels, while urban employment was 4 percentage points above its 2007 level. The report also notes that rural median household earnings grew by more than 2 percent in 2015, and were above their level in 2007 before the recession. The rural poverty rate had its greatest decline in 2015 since the Great Recession, although the rural poverty rate remains above the pre-recession level. The findings were communicated via a webinar and in briefings to senior USDA policy makers.

The rise in rural child poverty since 2003 is explained more by rising income inequality than by a decline in average income. 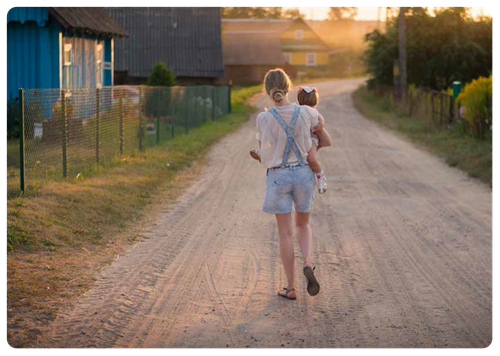 Between 2003 and 2012, the share of rural children living in poor families rose from 20.1 percent to 26.7 percent, its highest level since at least 1968. Thirty-five percent of this increase in rural child poverty was due to declining average family income, 24 percent stemmed from demographically driven changes in the distribution of income, and the remaining 41 percent of the increase may be attributed to other changes in the distribution of income—namely, faster-than-average income declines for families near the poverty line—that cannot be explained by demographic shifts, and that occurred despite rising educational attainment. Between 2012 and 2014, average real incomes for urban and rural families with children grew by about 6 percent, approximately returning to their 2003 levels. This income growth has reduced poverty, but the rise in income inequality since 2003 has not been reversed, and this growing inequality has limited the extent of poverty reduction in both urban and rural counties. As a result, urban and rural child poverty rates remain 3 to 4 percentage points above their 2003 levels. The research was widely distributed through an ERS Amber Waves feature article, "Understanding Trends in Rural Child Poverty, 2003-14" and has been the subject of a number of briefings to senior USDA and other Federal policy makers.

ERS researchers and others who analyze conditions in Rural America most often study conditions in nonmetropolitan (nonmetro) areas, defined on the basis of counties. Counties are the standard building block for collecting economic data and for conducting research to track and explain regional population and economic trends.

In addition to conducting research that uses the basic metro-nonmetro dichotomy, ERS has developed multi-level county classifications to measure rurality in more detail and to assess the economic and social diversity of nonmetro America. Some of these classification schemes have been used to determine eligibility for Federal programs that assist rural areas. Building on the urban-rural definition, ERS has developed sub-county classifications that more accurately delineate different levels of rurality and address program eligibility concerns.

In addition, ERS has created files designed for use with the American Community Survey’s Public Use Microdata Sample (ACS-PUMS) that enable rural researchers and others who work with household or person-level survey data to better classify areas as metro/nonmetro.

The Atlas of Rural and Small-Town America was updated with new population, employment, and unemployment data estimates, and with new variables based on county-level American Community Survey data.

Atlas of Rural and Small-Town America is a web-based interactive mapping tool that displays a broad range of data at the county level to visualize how social and economic conditions vary in rural areas across the United States. Users can create and download maps and download data.