Participation in nutrient trading by livestock operations may depend on current nutrient levels.

Despite decades of nutrient-runoff reduction efforts, manure remains a significant contributor to Chesapeake Bay nutrient loadings. An ERS report assessed the extent to which animal feeding operations (AFOs) are implicated in Chesapeake Bay nutrient pollution and analyzes whether AFOs may be as likely to participate as crop-only producers in nutrient-trading programs. The study finds AFOs constituted only 15 percent of agricultural operations in the Chesapeake Bay watershed but controlled 63 percent of the acreage to which manure is applied in 2012 – suggesting the potential benefits of having these producers participate in nutrient trading. Simulation results showed that AFOs without excess manure nutrients are as likely to participate as large-scale, crop-only producers. However, AFOs with excess manure nutrients (more nutrients than the level allowed in a nutrient management plan) are much less likely to participate, due in part to requirements to first transport excess nutrients off-farm. 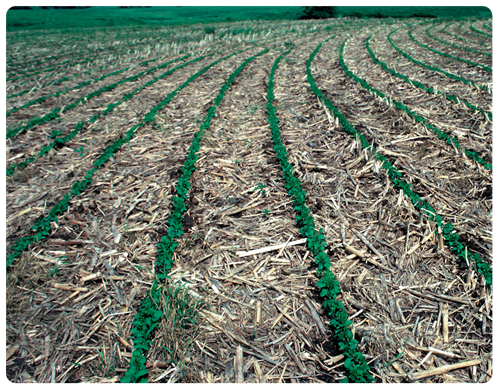 ERS analyzed no-till and strip-till adoption, planting of cover crops, and nutrient management practices on corn, soybean, wheat, and cotton acres—practices that are supported by USDA conservation programs. Results show that U.S. farmers’ adoption of these practices varies widely by crop and region. In addition, many farmers are “partial” adopters, adopting conservation practices on some but not all acres of their farm. In 2010-2011, no-till/strip-till was used on roughly 40 percent of combined acreage of corn, soybean, wheat, and cotton and cover crops were in use on less than 2 percent of total cropland for all crops. Also, farmers reported applying nitrogen at rates higher than “benchmark” application rates for 36 percent of corn acres, 19 percent of cotton acres, 22 percent of spring wheat acres, and 25 percent of winter wheat acres. This report provides essential information on trends in conservation practice adoption that will be valuable in tracking the progress of Federal and state efforts to encourage conservation on U.S. farms. The report focuses heavily on practices that are often seen as promoting soil health. Findings were cited in local and national media, including major national newspapers.

An ERS report examined the biophysical and economic impacts of climate change under several future climate projections, and implications for farm returns, resource use and environmental quality. It also identifies the regions and crop sectors that are most vulnerable to climate change and explores whether irrigation limitations could reduce farmer flexibility in their adaptation decisions. The report also found that yields for some crops such as wheat, hay, and barley are projected to increase. Also, irrigated field crop acreage is projected to decline as a result of climate change over the 2020 to 2080 study period. Before midcentury, the decline in irrigated acreage is largely driven by regional constraints on surface-water availability for irrigation. Beyond midcentury, the decline reflects a combination of increasing surface-water shortages and declining relative profitability of irrigated production.